As the World’s First Cross Supply Chain Orchestrator® it is TRI-VIZOR’s mission to offer specialized knowledge and solutions to prepare, create, support and orchestrate flow bundling and horizontal partnerships in transport and logistics. TRI-VIZOR was founded in Belgium on the 18th of November 2008 by three partners Alex Van Breedam, Sven Verstrepen and Bart Vannieuwenhuyse, originally as a spin-off company of the University of Antwerp.

In 2009, the famous Third-Party Logistics Study of Capgemini and PennState University mentions TRI-VIZOR as pioneer in horizontal collaboration. TRI-VIZOR wins his first award in 2010, the Air Chase Competition, for creating joint warehousing for a chocolates producer and a candy distributor.

April the 24th 2011 is another milestone in TRI-VIZOR´s history. That day TRI-VIZOR launched the world’s first orchestrated consolidation project with two shippers, UCB an BAXTER. Since, its base line World’s First Cross Supply Chain Orchestrator® was a fact. For this project, TRI-VIZOR was awarded European Supply Chain Innovation Prize in Berlin in 2011 (World Trade Group). That same year, the Belgian Employers Organization (VBO-FEB), elected TRI-VIZOR as Belgium’s most sustainable company. Subsequently, in 2012, TRI-VIZOR became spin-off company of the year. 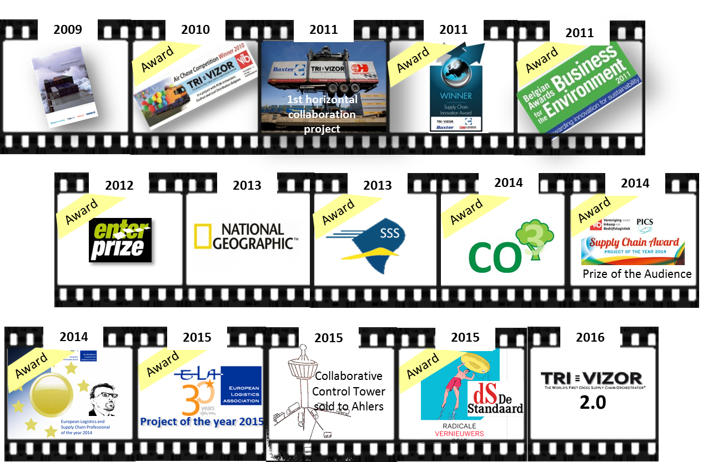 In 2013 TRI-VIZOR played a key role in National Geographic’s documentary Behind the Science – Eco-economy. That same year, TRI-VIZOR was also rewarded with the Short Sea Shipping Award for the setup of a short sea corridor between Belgium and Spain in order to combine and consolidate the flows of the companies Ontex, Etex, Baxter and Colruyt.

The ELA-European Logistics Association emphasized the importance of the Pepsico-Nestlé consolidation project for European logistics by selecting it as the European Project of 2015. At the end of 2015, TRI-VIZOR sold its innovative Collaborative Control Tower to Ahlers (www.ahlers.com), as a result of a clear strategic choice to focus on its roles of architect and trustee. That same year, the leading Flemisch newspaper De Standaard and the Sociale Innovatiefabriek have chosen TRI-VIZOR as one of the ten most important Radicale Vernieuwers (Disruptive Innovators) of today’s society.

2016 is the start of TRI-VIZOR 2.0, with an even stronger strategic focus on its role of initiator, architect and trustee. Since 2016, Alex Van Breedam and Bart Vannieuwenhuyse are the  company owners.

In 2022 “TRI-VIZOR 3.0” has been launched. The concept of the physical internet is now the ultimate goal. Every bundling, clustering, pooling or sharing initiative is seen as considerable step towards that physical internet. More and more public-private partnerships are seen as the way to set up sustainable and balanced logistics solutions. Urban logistics has become a focus domaine. A governance frame is developed to anchor multilateral collaborations. We launched a positioning paper with challenges and yards for next-generation logistics. We act in a quadruple helix context, bridging gaps between companies, authorities, knowledge institutions and civil society.

As a professional, but also as an academic, Alex’s key experience is in Supply Chain Management (SCM) and Logistics. He was former partner and practice leader SCM at KPMG, a worldwide leading consultancy company. He acquired exceptional experience in the setup of supply chain strategies and the conception and implementation of decision support systems. Subsequently in his job as independent advisor, he was hired by major companies to supervise and to provide expert guidance for their Supply Chain strategy and logistic optimization projects, most often at board room level. Alex is also co-founder of the Vlaams Instituut voor de Logistiek (Flanders Institute for Logistics). Between 2003 and 2008 he was the first managing director of that institute. Alex is also the inventor of the Extended Gateway® concept. It’s an innovative and powerful concept to connect regions with natural advantages for European distribution to international gateways. The idea and the challenge behind the concept is the creation of additional logistics prime locations (i.e. minimal total cost locations) for added value logistics along the corridors of the integrated multimodal hinterland network.

In 2014, he was awarded the price of Logistics and Supply Chain Professional of the year by the European Logistics Association (www.elalog.eu).

In March 2002 he obtained his doctoral degree in Applied Sciences with a script titled ‘Strategic Logistics Management through Rational Transport Mode Choice’. Afterwards Bart worked as senior consultant at Transport & Mobility Leuven (TML), a spin-off of the K.U.Leuven for two years. From July 2004 on Bart Vannieuwenhuyse works as expert (2004-2007) and as Research Manager (2007-2008) at the Flanders Institute for Logistics (VIL). He has coordinated the research in the fields of Multimodal Transport and Extended Gateway.

Bart Vannieuwenhuyse is the author of several publications on logistics, multimodal transport and decision support systems. He is also a frequent speaker at various conferences and a lecturer at several Belgian universities, high schools and knowledge institutes.

In November 2008, he has co-founded TRI-VIZOR NV, as a spin-off company of the University of Antwerp. As the World’s First Cross Supply Chain Orchestrator®. Its mission is to offer specialized knowledge and solutions to create, support and orchestrate flow bundling and horizontal partnerships in transport and logistics, along the supply chain from port to city.

With TRI-VIZOR, Bart has been involved in various projects over the past decade in both industry and the public sector. Given his role at various universities and colleges, he is very adept at a triple helix approach.

Beside improving the utilization of current logistics capacities, Bart is preparing the future as one of the initiators of future proof transport initiatives (FPTI).